We cannot display this gallery

Since the days when Al-Shukairy was young, he took part in many Palestinian national activities. His main aim was to unite the nationalist movement. He took part in many strikes and demonstrations while he was studying, and was arrested due to his continuous activities. He was always enthused by the national events taking place across Palestine, and in turn gave many nationalistic speeches to encourage young men. 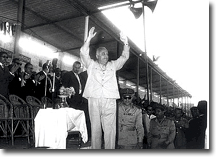 He was also very active in his hometown Akka, delivering speeches and calling for resisting colonialism and Zionism. .

He attended several conferences, sometimes as a member, at others as the president. His main concern was Palestine, and the founding of committees throughout the country in order to establish the Palestinian State which would unite the people to stand in the face of colonialism and Zionism. 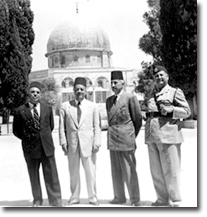 Along with other young men, he took part in the awareness campaigns which took place in the mid thirties. The campaigns called on Great Britain to change its policies in Palestine and to put an end to Zionist immigration into Palestine.

In April of 1936, Yafa was on strike to condemn the cruelty of the governing Colonialists and their bloody treatment of local residents, especially on 15/4/1936. Al-Shukairy took part in the strike and consequently helped in the founding of a national committee in his hometown Akka. The committee joined up with the dignitaries of Northern Palestine and headed to Jerusalem to hold talks with the leaders of the National Movement to unify the different fronts and to establish a Consolidated National Front to lead the fight.

Al-Shukairy was arrested during one of the demonstrations he was addressing and was deported to Samakh. He was later moved to Al-Hemma in July 1936 where he was kept under house arrest.

In 1937, the Arabs reacted strongly to the suggestion of partitioning Palestine.

Al-Shukairy joined the media and awareness committee that was established to fight the suggestion. But the year 1938 was the most important in Al-Shukairy's life: he was involved in politics and the media at the same time, and he met a number of leaders of the revolution in Damascus and Beirut.

Al-Shukairy was not a member of the High Arab Committee, but he attended all its important meetings. He prepared a full study on the White Book, which was issued by the United Kingdom in 1939. Al-Shukairy was forced to move to Cairo soon after.

Al-Shukairy’s father died in 1940, at which time revolutions had stopped in Palestine, and so the British authority allowed him to return to Palestine to attend his funeral. Al-Shukairy was also busy with the events of World War II.

When the Arab League was founded in 1945, Al-Shukairy was in Cairo, close to the league’s activities and meetings. Mussa Al-Alami offered him to travel to Washington to establish an Arab Media Office there. The office started working by the end of September of that year.

Al-Shukairy held a press conference at the opening of the Arab Media Office in Washington and delivered a speech. He also fielded a number of embarrassing questions posed by Jewish journalists.

Al-Shukairy attended the conference held in Anshas, Egypt, in 1946. The conference dealt with the Arab League. The Syrian President Shukri Al-Quwatly showed him a preview of the clause pertaining to the Palestinian issue before it was published at the conference.

Al-Shukairy participated with the Palestinian delegation in the meeting of the Arab League held in Bloudan, Syria, in 1946.

In March 1947, the Arab League held a meeting, which Al-Shukairy attended as an advisor to the Syrian delegation. During that meeting he presented a legal memo about the right to self-determination.

In june 1948, he participated in the Arab League delegation to Rohdes where they met with Count Bernadot the U.N. Mediator.

Al-Shukairy also attended the meeting organized by the United Nations in Saint George Hotel in Beirut in 1949, also as an advisor to the Syrian delegation. He gave a lengthy speech in which he focused on the right of the Palestinian refugees to return to their homeland without any conditions.

At the end of 1949, Al-Shukairy returned to Damascus from America, and presented a report to the Syrian Government concerning the Palestinian refugees. In 1950, Al-Shukairy traveled to Switzerland to represent Syria before the Reconciliation Committee.

In 1951, Al-Shukairy was appointed Assistant Secretary General to the Arab League. The following year was full of Arab and International events.

Throughout 1950 – 1956 Al-Shukairy represented Syria in the United Nations, in order to defend the Palestinian cause and those of Arab Maghrib.

In May 1957, Al-Shukairy headed the Arab League mission to Yemen to investigate Britain's invasion of Southern Yemen. He also advised Imam Ahmad of Yemen on the matter.

From 1957 – 1963 Al-Shukairy worked with Saudi Arabia as head of its mission to the United Nations.

He was chosen in 1963 as the representative of Palestine in the Arab League and headed a Palestinian delegation to the United Nations session in that year.

Al-Shukairy attended the First Arab Summit Conference in January 1964, which discussed the Palestinian issue and the importance of establishing the Palestinian entity, as well as the issue of altering the course of the Jordan River by Israel.

He founded the Palestinian Liberation Organization (PLO) in Jerusalem, in May 1964, and advised the outcome to the second Arab summit in September 1964 in Alexandria.

He founded the Palestinian Liberation Army, the Palestine Broadcasting Service and the Research Center and opened offices for the organization in the Arab states and in other friendly countries.

He participated in the Casablanca Summit Conference, held on 13/9/1965, in which the covenant of Arab Solidarity was signed and the plan for a Unified Arab Military Leadership was approved.

In December 1967, Al-Shukairy submitted his resignation as head of the Palestinian Liberation Organization.

Still concerned with Arab and Palestinian issues, Al-Shukairy followed up international politics, and continued meeting with officials and citizens. In addition to his visits to the Arab countries, he wrote a letter to the Arab Summit Conference in 1974, in which he called for the preservation of the Ramadan (October-1973) War achievements.

In 1977 and 1978 Al-Shukairy delivered several messages and held media conferences concerning the so called peace process. He strongly opposed the agreement of Camp David between Egypt and Israel.

Al-Shukairy wrote his memoirs and published several books on Arab affairs, especially the Palestinian issue.
For more information and details, refer to Publications.